The 20 Ways in Which I am Not Stereotypically Gay 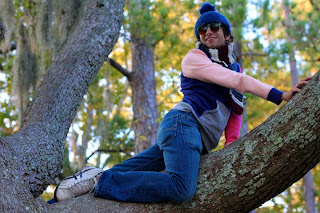 Let’s face it; there are a lot of stereotypes of gay men. Some of them are good and some of them are bad, but all of them are damaging in that they attempt to tell gay men how they should behave and enable society to marginalize the diversity of the gay community, so I figured that I’d write up a quick list of all the ways in which I am not stereotypically gay. It’s not that there’s anything wrong with conforming to stereotypes concerning gay men--seriously, there's not just look at the picture of me above--it’s just that the stereotypes of gay men that are culturally enforced portray an image of the gay community that is not necessarily genuine or reflective of who we are.

1. I enjoy nature, and not just because it’s hip to be a hiker, but more because of an intrinsic love for it. Which leads me to the next thing;

2. I am not scared of bugs: as a matter of fact, I think that they’re both fascinating and kind of cute if anything.

3. I am Southern: according to some people who are from north of the Mason-Dixon line, the existence of gay southerners is shocking.

4. I loathe shopping: When I go to the mall—which I did for the first time in a year yesterday—I get in, get what I need, and get out. Racks of clothes sort of bore me.

6. I am not promiscuous: While I’ve made a mistake or two in my life, I refuse to dissociate physical affection from interpersonal/emotional affection, and consequently, I’m like Kelly Clarkson, “oh, oh, I do not hook up, up, I go slow.”

7. I like music other than pop, indie, and electronica: this includes but is not limited to, bluegrass, Johnny Cash, hip-hop, opera (which I guess is pretty stereotypically gay), and Elvis.

8. Clubbing is not my raison d’etre: I would much prefer to watch a movie and cuddle.

9. I do not watch Glee, have never seen Wicked, and think that Gossip Girl is kind of a waste of time.

12. I’m not scared of vaginas. After all, that is where we all came from isn’t it?

13. I’m not superficial, and if you think otherwise, we should have a serious conversation.

14. I don’t like to gossip: it’s not nice to talk about people behind their back.

15. I love power-tools and construction work.

16. My dream is not necessarily to live in New York City or San Francisco; I like the South just fine, and I’d also be fine with a village in Burma.

17. I’ve never tanned in my life, because I don’t like the idea of melanoma.

18. I value the idea of family and family structure. I aspire to be a father, to have a husband, and to someday have grandchildren.

20. I really like Mormons. Some of my best friends in high school were Mormon and I find their spirituality and commitment to principle inspiring.

So those are my top twenty. I’d love to hear some other people’s.

Also, be on the lookout for my next post, "THE 20 WAYS IN WHICH I AM STEREOTYPICALLY GAY"
Posted by Jacob at 4:00 PM