The Pinhook and The Flowergirl 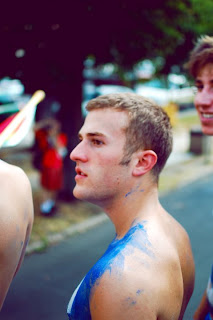 I wasn't sure what to expect, but, feeling spontaneous, I accepted my friend's offer to venture to The Pinhook in downtown Durham. I'm glad I did.

One of the headlines that night at The Pinhook was the band of the partner of a female friend of mine. I have always been a fan of live, original music, but this particular performance hit me in a very special way.

The night began with a band which already seemed to have pleased the crowd fairly well (I recall them singing about corpses in some body of water...). Eventually, my friend's partner took the stage. After a few songs in the set, she dedicated a song, "The Flowergirl," to her partner in the crowd. I felt myself getting excited.

I saw everyone else getting excited, too.

The band began to play, and I immediately sensed a connection between the two: the eye contact, the smiles, and the general happiness. Through all of these, they were saying so much more to each other than the story told in the lyrics of the song.

The crowd adored it. There was such a strong presence of acceptance and embrace in the room. That was the first time I had ever experienced something like that. A woman was singing to her lover, another woman, and no one thought twice about it. It was a celebration of love that may not have been so celebrated just a short time ago.

To those two: Thank you for your love.
Posted by Ryan at 9:00 AM