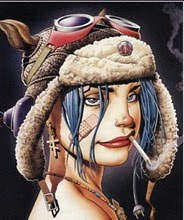 If you had a chance to wander around campus yesterday morning, you may have noticed a new addition to the extensive expanse of event and party flyering that regularly papers Duke. All over campus, "Got Privilege?" and "Heterosexual Privilege Checklist" flyers have sprung up, covering advertising boards, academic buildings, bathroom stalls, and bus stops (rumor has it that James B. Duke himself was found adorned with an appropriately pointed "Got Privilege?" sign). 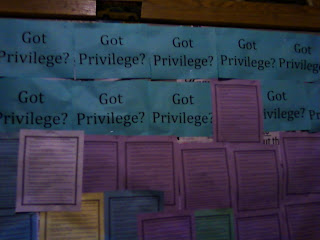 Let me just throw out there right now that I think that this is awesome. This kind of action addresses one of the most insidious ways in which our society (including Duke), silences LGBTQ experiences. Through the perpetuation of an implicitly accepted hierarchy of worth, we have become desensitized to all the little things that tell LGBTQ persons every day that their experiences are "other" or invalid. For example, I can count the number of times I have seen an LGBTQ couple showing affection in public on campus on my two hands. However, when I walk around campus I am bombarded by heterosexual displays of affection everyday, to the point that I don't notice if a heterosexual couple is holding hands or kissing in public. But if an LGBTQ couple were doing that? You bet I'd notice! I think it's safe to say that most of us would. LGBTQ love still exists within a theoretical, rights-based understanding ("I'm not homophobic! You can be gay, just don't be gay in front of me,"). We have yet to embrace, as a society, a space wherein LGBTQ experiences are given just as much credence as straight (or cis-gendered) ones.

The flyering campaign seems to be especially relevant in light of an upcoming event that is specifically aimed at addressing these pervasive issues of privilege. Today, from 12pm-3pm on the Duke Plaza, there will be a flash hand-holding/PDA mob, wherein participants (gay, straight, lesbian, bisexual, transgender, queer, questioning, intersex, asexual, etc) will hold hands with/cuddle/make-out with a same-sex partner. There will be no posters, no flyers explaining what we are doing. But just by being there, publicly displaying same-sex affection, we will be pushing our peers' boundaries and their perceptions of what is and is not "normal" to see.

If you too can count on two hands the number of times you have seen LGBTQ couples who feel comfortable and safe enough to display affection on the Plaza, Main Quad, in the dorms, at the bus stop, etc., then imagine how affirming seeing tons of same-sex affection (between men and gender-nonconforming individuals as well as women) would be. Now stop imagining that reality and come take action. It is up to us to push our peers to confront the crap that is the status quo. It's time for us to queer up.

Facebook event for the hand-holding/PDA flashmob here.
Posted by Carla J. at 8:30 AM